In 1924 a group of Greek Shopkeepers in the inner city area of Sydney decided to lease some floor space so that they could meet during their leisure hours. These meetings brought about formation of a Club which they named the Hellenic Club. All the National celebrations and concerts were held in these premises for many years. The early pioneers who started this idea such include the families of the Louisons, Soulos, Pangas, Gravas and Georgiadis

The Hellenic Club was primarily a sporting and businessmen's Club. The Club was originally opened for membership to Greeks from all parts of Greece however, by 1958 it was open to other approved applicants.

On 4 December, 1926, the Hellenic Club was incorporated and it served to bring future generations of Greek migrants together. During these early days the Club was supported the Greek Orthodox Church and assisted in the building of the St Sophia Church. The Club also assisted the financing of the Greek Archdiocese.

For many years, the membership of the Hellenic Club was restricted to sixty (60) persons. However, during the World War II all Greeks serving in the Armed Forces were accepted as honorary members and had the use of all facilities available, at that time, on those premises.

The club began to grow and the directors increased the membership and allowed younger members with new ideas on the Board. The Board of Directors, with the new members, thought fit to sell Adams Chambers (which was purchased by the Club in the 1940s) and purchase the property where the present Club stands and which was eventually built on and called Hellenic House. On 19 October, 1959 the Hellenic Club was officially opened by the then Premier Mr JJ Cahill.

The plan was to accommodate various Greek establishments in this building, such as the Greek Consulate, the Tourist Organisation, the Greek Chamber of Commerce and the National Bank of Greece, central office for the Greek Archdiocese and for Greek professionals such as doctors, solicitors, accountants and so on, however, but these efforts did not succeed.

The other alternative was to house Greek Organisations such as the Greek Sub-Branch of the R.S.L., the A.H.E.P.A., the Greek Young Matrons, The Pan-Hellenic Soccer Club and many others which proved very lucrative and helped pay off the many debts which the Club had accumulated during its construction.

The Hellenic Club will always maintain its current activities in the future and its main consideration to utilise future income to build retirement facilities for the aged and to maintain and promote the Greek culture in its new building for future generations. The club currently offers sponsorship, donations and assistance to a wide range of organisations and individuals.

Thank you to our generous club members, family and friends who have donated images and photos found on The Hellenic Club Sydney website, and special thanks to the collection donated by the late George Pappas.

Like all of us, we are closely monitoring new developments regarding COVID-19 (coronavirus). The health and safety of our customers and employees is of the greatest importance. We have decided to raise our usual high standards of

cleanliness and health safety even higher. We want to take this opportunity to let you know of the policies and procedures which are in place surrounding COVID-19.

What are we doing?

We have implemented several new policies and procedures following the guidance and recommendations of the NSW Ministry of Health. We are in constant communication with our employees to reinforce our increased sanitization and safety procedures in both customer facing and back-of-house areas.

•     All employees are instructed each day on correct hand sanitizing procedures.

•     Employees are instructed to wash hands regularly including before and after breaks.

•     Hand sanitizers are located throughout public and back of house locations. Sanitizers are refilled and checked regularly.

•     We have increased frequency and extent of our cleaning practices such as additional wipe downs of all hard surfaces and touch points including the kitchen, bathrooms, bar and dining tables.

•     All employees have been advised to not attend work with a fever or respiratory illness that can be transmitted to others.

We want to ensure that you remain confident in us during these challenging circumstances and to know that your health and safety is our priority. We thank you for your patronage and loyalty.

If you have any questions or concerns please do not hesitate to contact us at info@hellenicclub.net.au or (02) 9264 5792. 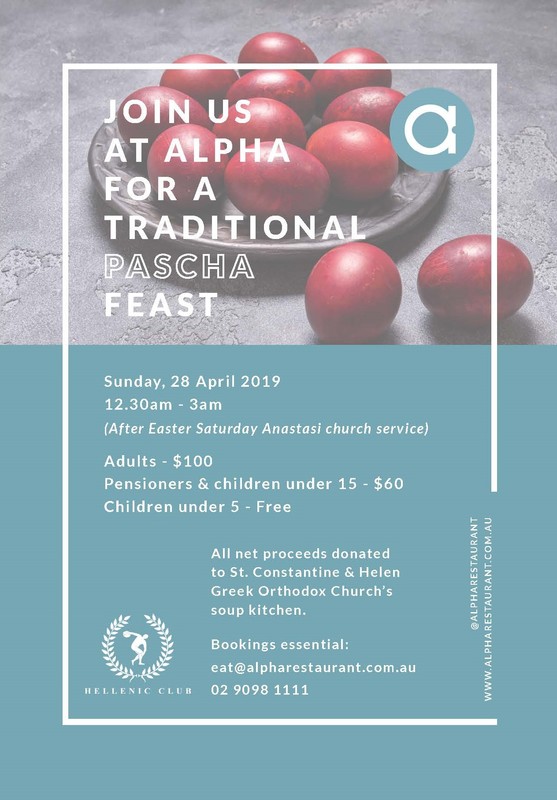 The Hellenic Club, is pleased to invite you to join us for the traditional Pascha feast at Alpha Restaurant after Easter Saturday Anastasi Church Service on 28 April 2019 from 12:30am - 3:00am.

You will savour a selection of traditional Easter dishes assembled by our celebrated executive Chef Peter Conistis’, the Godfather of Greek Food in Australia. The net proceeds from the feast will be donated to the St Constantine & Helen Greek Orthodox Church (and Reverend Nektarios Zorbalas) for their community kitchen which provides nutritious meals in a safe and caring environment to those most in need.

Please see the full menu which is attached.

We want to thank you for your support, and we look forward to celebrating with you at the Feast. A booking form is attached for your convenience. Alternatively you may book through the Eventbrite link on our website – www.alpharestaurant.com.au.

Please contact the Alpha Restaurant team on (02) 9098 1111 or email eat@alpharestaurant.com.au,  if you have any questions.”

Released by special permission of the President of Greece, 12 Evzones will pay tribute to the ANZACS and reflect on their nation's involvement in the Battle of Crete and the Greek Campaign.

The general public are invited to pay their respects and witness the Evzones at the following events:

“This is a wonderful opportunity for Greek Australians to honour the ANZACS and for all Australians to discover more on the historical significance of the ANZACS in Greece,” Arthur Balayannis, CEO of the Hellenic Club said.

“The Evzones have made a tremendous impact with their participation in ANZAC Day events around Sydney over the last two years, and we look forward to hosting them in Sydney for the third consecutive year.”

The visit comes under the auspices of the Consulate General of Greece in Sydney, and is proudly supported by the Joint Committee for the Commemoration of the Battle of Crete and The Greek Campaign, the Australasian Hellenic Educational Progressive Association (AHEPA), and other benefactors.

Please click on this link to see the Public Program of their visit.

ALPHA TAKES YOU TO CRETE FOR THE NIGHT... 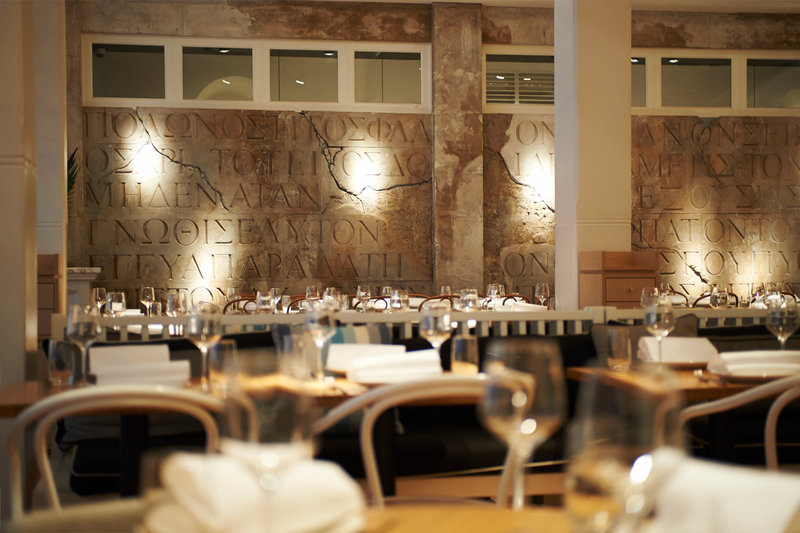 Join us for an exclusive dinner on Tuesday March 27, as we take you to Crete for the night. Cretan cuisine is renowned for its unique ingredients grown or produced on the island, including dittany herb and anthotyro cheese, and dishes such as dakos and xerotigana fried pastries. Guests will enjoy a delicious four-course meal created by Executive Chef Peter Conistis, with matching wines for $110 per person.

To book, either email eat@alpharestaurant.com.au or phone 02 9098 8111 and mention the Cretan Dinner.

The Hellenic Club is pleased to invite you to join us for the traditional Pascha feast at Alpha Restaurant after Easter Saturday Anastasi Church Service on 8 April from 12:30am - 3:00am.

You will savour a selection of traditional Easter dishes assembled by our celebrated executive Chef Peter Coinistis, the Godfather of Greek Food in Australia. The net proceeds from the feast will be donated to the St Constantine & Helen Greek Orthodox Church (and Reverend Nektarios Zorbalas) for their community kitchen which provides nutritious meals in a  safe and caring environment to those most in need.

Please see the full menu which is attached.

We want to thank you for your support and we look forward to celebrating with you at the Feast.

Please contact the Alpha Restaurant team on (02) 9098 1111 or email eat@alpharestaurant.com.au to make a reservation or if you have any questions. 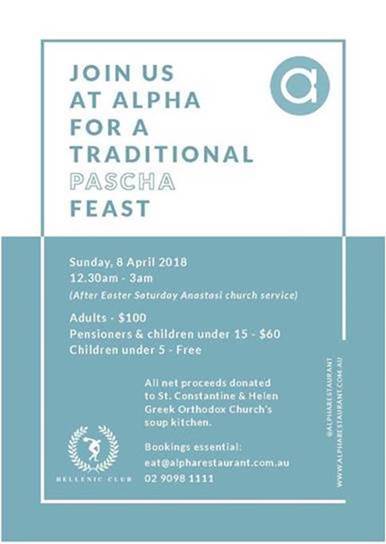 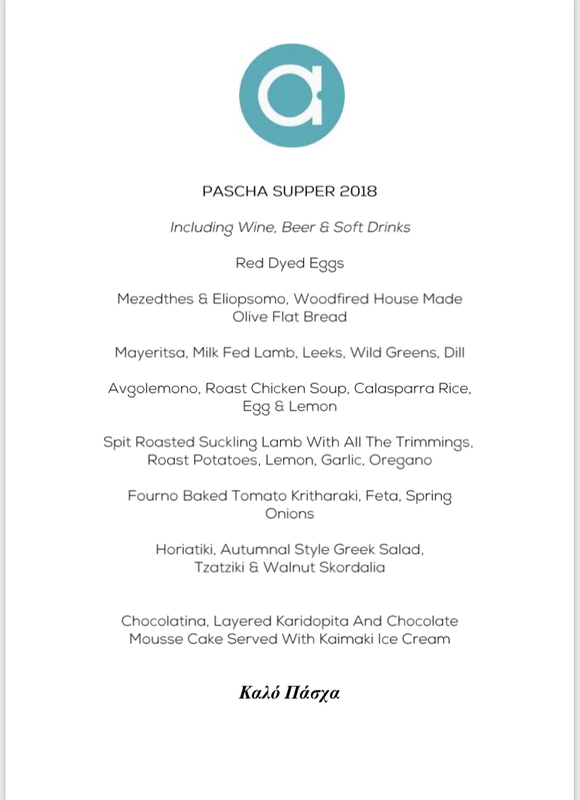 Professor Alivizatos will speak on “Authoritarian Democracy – Populism, Human Rights and the Rule of Law in Europe. Recent Developments from a Greek Perspective”. The NSW Patron of HAL, The Honourable Justice Melissa Perry, Federal Court of Australia, will also speak. 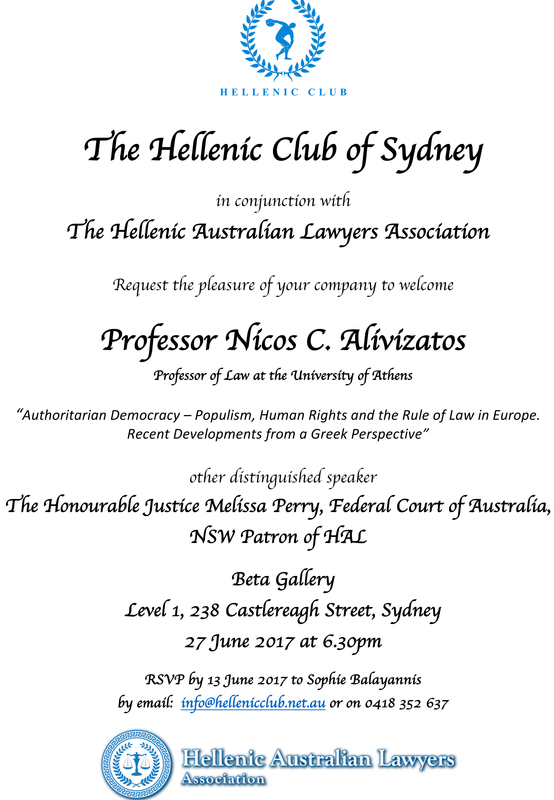 The Hellenic Club brings the Greek Presidential Guard to Sydney

Nine Evzones – the soldiers of the Greek Presidential Guard – will visit Sydney to commemorate Anzac Day.

Released by special permission of the President of Greece, the Evzones will visit Adelaide and Sydney to take part in the official ANZAC Day ceremonies, celebrating the role of the soldiers of Greece and Crete, often known as the ‘forgotten ANZACs’.

The Evzones will join the Allied Forces for Sydney's Anzac Day March, and form a Guard of Honour at the Martin Place Cenotaph from 1-2pm on April 28 and 29.

The Evzones’ arrival in Sydney on April 24 will follow a historic four-day visit to Adelaide, organised by the Foundation for Hellenic Studies and supported by the South Australian Government. Official events in Adelaide will include a march to the city’s War Memorial and a pre-game flag-raising ceremony at Adelaide Oval for the AFL Anzac Day round between Port Adelaide and Carlton.

The defense of Greece by the ANZACs and other Commonwealth forces is recognised by historians as one of the major contributions to the Second World War, significantly delaying the Nazis’ invasion of Russia.

For the final programme of the Evzones' visit to Sydney, see below. 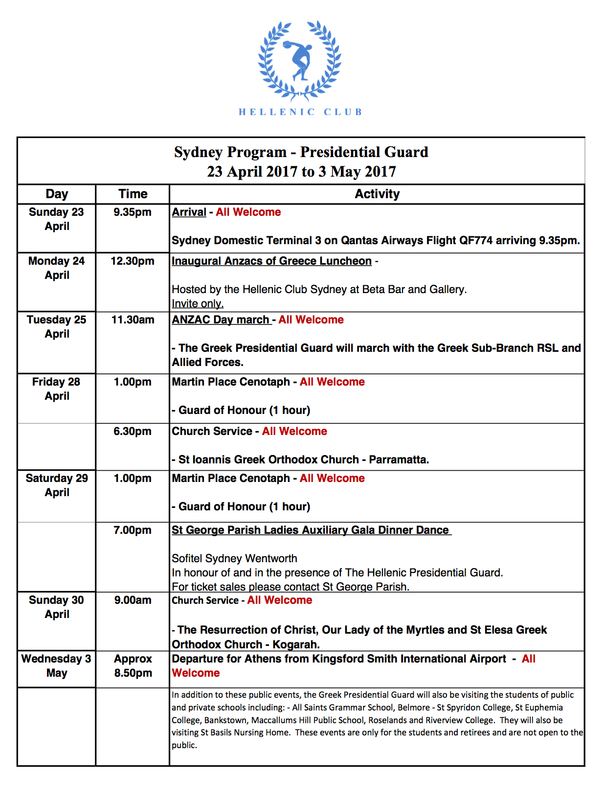 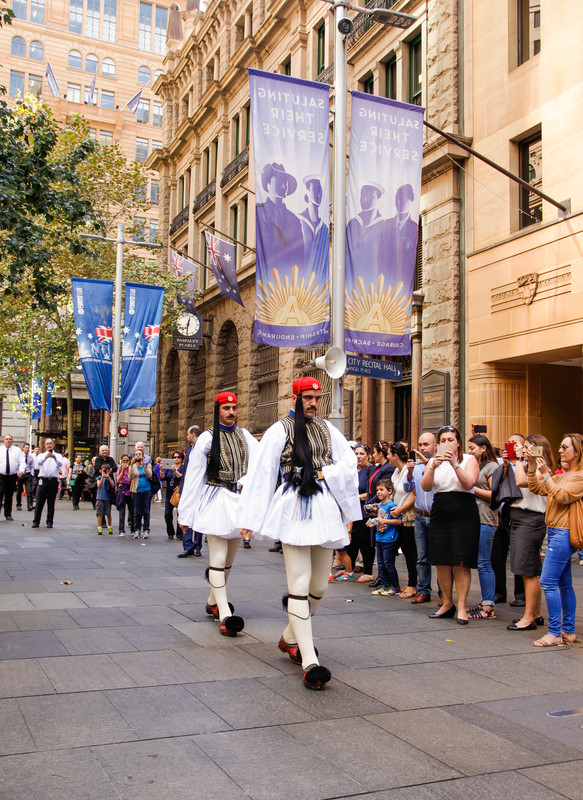 Respected former player and NRL identity, Phil Gould AM chatted with the guests of honour about their successes in the NRL, while guests dined on a menu prepared by Alpha’s renowned Executive Chef, Peter Conistis, and a selection of Greek wines.

Net proceeds from all ticket sales were donated to The Hellenic Initiative, a global not-for-profit organisation that works to assist Greece through crisis relief, entrepeneurship and economic development.

To view the video honouring the guests, click here. 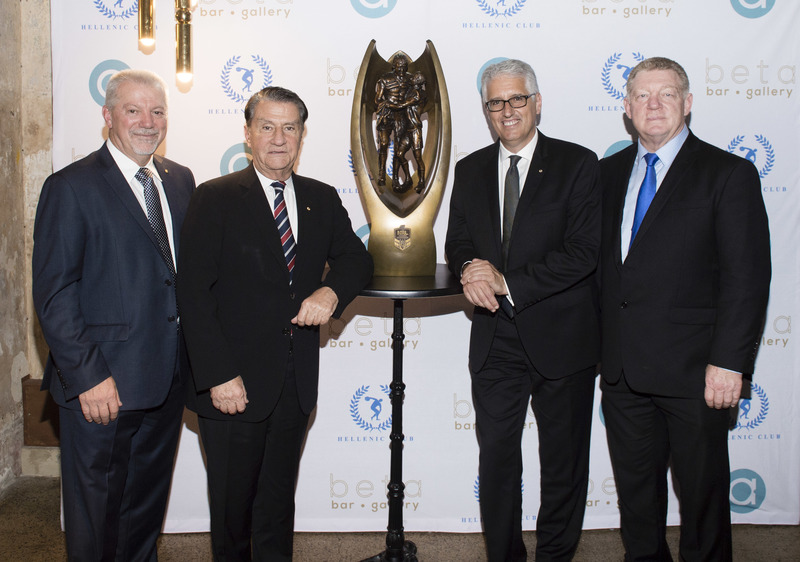 The Hellenic Club Sydney is honoured once again to announce the impending visit of the elite Presidential Guard of Greece. The contingency of nine Evzones and two officers has been released by special permission of the President of Greece, and will visit the city of Adelaide from 19th April to 23rd April and Sydney from 23rd April to 3rd May. The Evzones will take part in official ANZAC Day ceremonies, commemorate the history of the ANZACs, and their involvement in the Battle of Crete and Greek Campaign, when Australian and Greek soldiers fought side by side for our shared values of freedom and democracy. 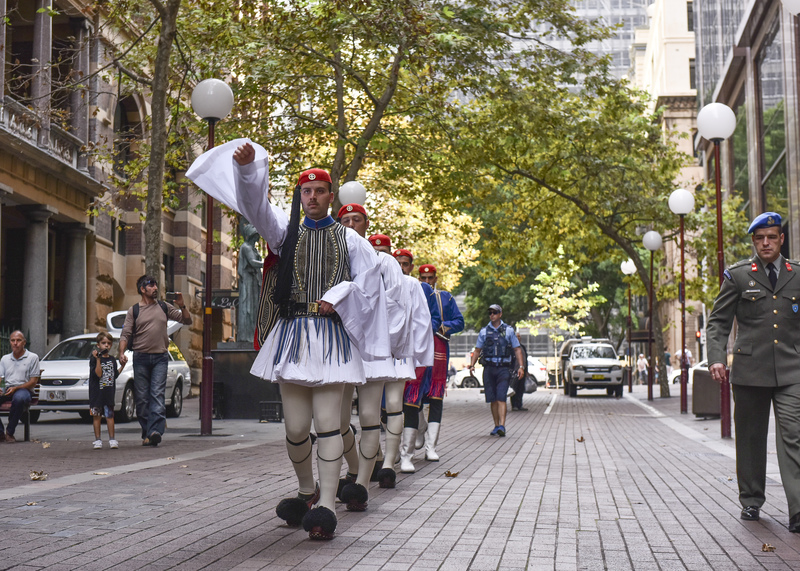 Join us for a traditional Greek Pascha Feast at Alpha Restaurant, with proceeds to be donated to the soup kitchen at the Greek Orthodox Parish of Saints Constantine and Helen. 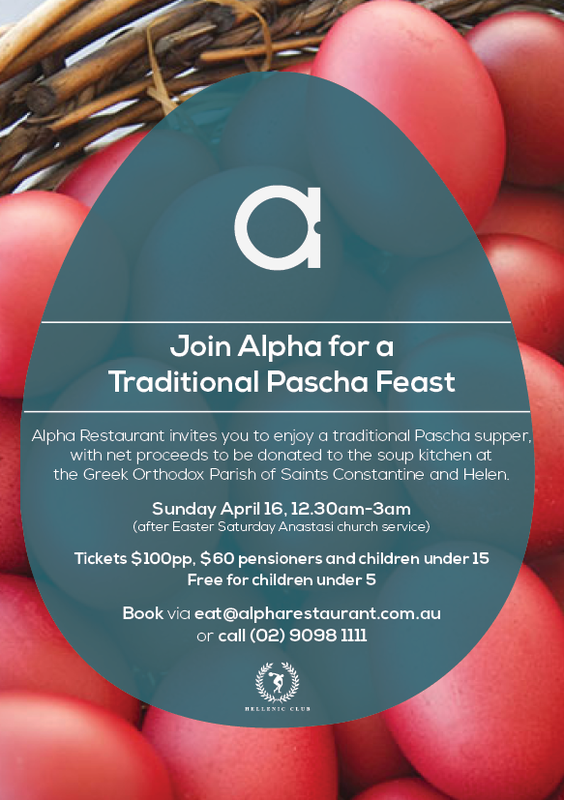 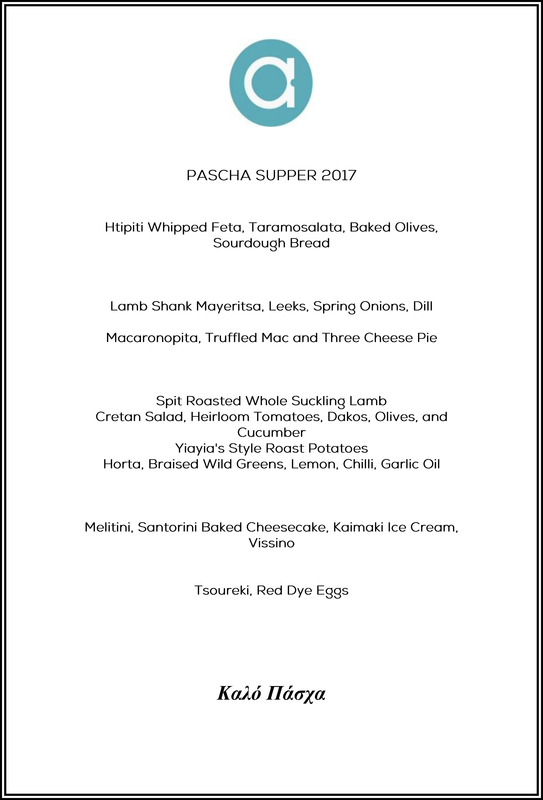